Updated: The 2019 application process is closed. Now in its seventh year, Tomorrow’s Peacebuilders offers global recognition for grassroots peace activists in war zones around the world. These are the only global awards for local peacebuilders – inspiring individuals who are building a better tomorrow in the world’s most fragile places. 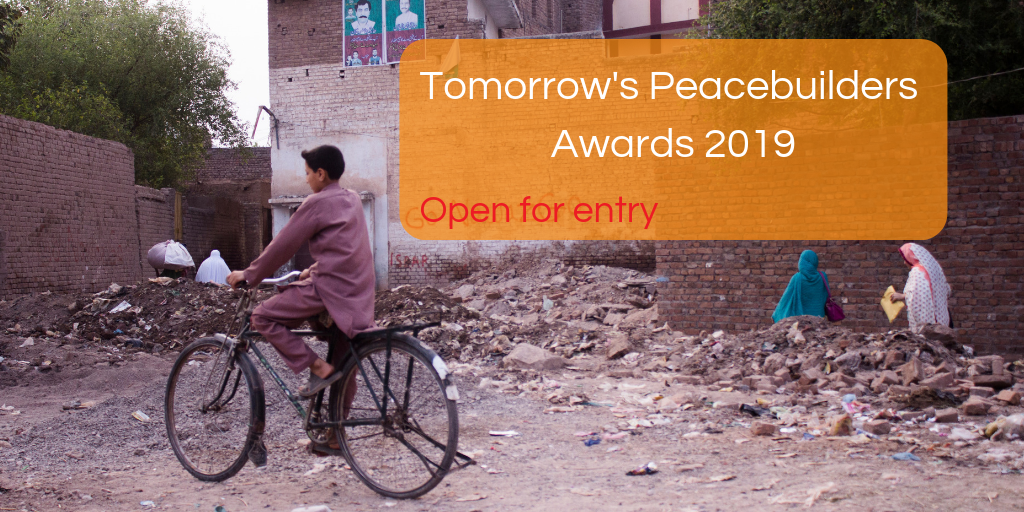 Peace Direct is delighted to announce the annual ‘Tomorrow’s Peacebuilders’ awards are now open for entries. Across the world, local people are tackling the causes of violence at the root, and rebuilding lives after war that has torn communities apart. Tomorrow’s Peacebuilders is the global awards for local peacebuilding, to recognise the work of those taking a stand for peace.

Awarded annually, we offer international recognition for grassroots peace activists in conflict-affected countries worldwide. These are inspiring people who are building a better tomorrow for their communities, in the most fragile and needy places. Three winning organisations will each receive $10,000 and online promotion of their work, and $1,000 will be awarded to the winning photography prize.

The winners will be chosen by an international panel of experts including distinguished peacebuilders, political figures of reconciliation, the Alliance for Peacebuilding and our amazing sponsors: Away, Bluegrass Ambassadors and the Pickwell Foundation.

In the last six years, over 1,000 entries have been received from nearly 100 countries. The prize winners have worked with ex-child soldiers in Uganda, young people in Israel-Palestine, villagers hit by drug wars in Colombia, tribal groups in Papua New Guinea and more.

This year’s categories are:
Three organisations will each receive $10,000 and online promotion of their work. A representative from each of the winning organisations will receive an all-expenses paid trip to the award ceremony at PeaceCon 2018 in Washington, D.C.
.
This year, there will also be a photography prize to celebrate photos that illustrate the theme of ‘local peacebuilding’. The winning entry will receive $1,000 of camera equipment for the photo that best illustrates local peacebuilding in action, or best communicates this theme.

Previous winner Gatwal Gatkouth from Uganda said: “The Tomorrow’s Peacebuilders Awards means so much to my organisation. It marks a new beginning that outlines the fact that, no matter how small one starts an initiative, if the intentions are good, the world one day honours their efforts. We started very small, with so much passion, and before long Peace Direct put our work on the spotlight. We now have a very solid footing for 2019 and we anticipate to scale up our peace building work deep into the grassroots communities.”

No matter how small one starts an initiative, if the intentions are good, the world one day honours their efforts.

Entries for the 2019 Tomorrow’s Peacebuilders awards, including the photography prize, will be accepted from 13 February until 15 April 2019.

Entry forms and further details on eligibility and the application process can be found online at www.peacedirect.org/tp/. You can also explore the activities of previous winners.