If you work with a peacebuilding organization, shouldn’t you be able to define peacebuilding? After almost two years of working with Peace Direct, I still struggle with the term. Forget trying to be correct by academic and professional standards – I’m just trying to get the general public to understand well enough to be inspired.

One of the issues when defining peacebuilding is its nature of inclusivity. If peacebuilding includes many efforts, then it loses its meaning. Perhaps the trick is to take a step as far back as possible and try to see peacebuilding in its totality. From this vantage point, I would say good indicators of peacebuilding are intersectionality and intergenerational.

Sure enough, the Internet proved me wrong.

The term intersectionality (which sounds much more sophisticated) was first used by Kimberlé Williams Clarke in her paper Demarginalizing the Intersection of Race and Sex: A Black Feminist Critique of Antidiscrimination Doctrine, Feminist Theory, and Antiracist Politics (1989). In it, she describes how multiple systems of oppression faced by one demographic, e.g, a black woman, is wholly different than racism faced by a black man plus sexist discrimination by a woman. Intersectionality has been recognized in these systems of oppression, but I claim that intersectionality can also be found in the response against these interlinked systems. Peacebuilding is the intersectionality of different progressive movements that work and uplift each other.

Earlier this month, Jane Fonda hosted her last Firedrill Friday before returning to Los Angeles. I attended a Firedrill last October that discussed how the military industrial complex further ruins the Earth. It was a thrill to participate in the rally, publicly marching alongside groups raising different signs but chanting the same words. The purpose of Firedrill Fridays and the way they organized themselves is great example of peacebuilding. Each week, Firedrill Fridays focuses on an issue that loosely relates to climate change. It starts with a teach-in held live on Facebook the evening before Friday’s rally.

Jane Fonda is a well-known American actor and no stranger to civil disobedience. With her experience and celebrity status, she has garnered public attention to the disastrous effects of climate change – and goes further. With her platform, Jane Fonda speaks out not just on climate change, but intentionally raises other issues such as migration, union jobs, and indigenous peoples’ rights. Firedrill Fridays share their platform with other progressive movements oriented towards a common goal of peace.

Last summer, one of our long-term partners from Sri Lanka visited Peace Direct’s office in Washington, D.C. Disháni Jayaweera is a peacebuilder from the Centre of Peacebuilding and Reconciliation (CPBR). She did not come alone; Dishani brought along CPBR’s youth coordinator, Sajani, to introduce her to the “world of international peacebuilding”.

During our meeting, Dishani gave Sajani the time to speak about CPBR’s interfaith and youth leadership programs all the while advising her on what to expand upon and emphasize regarding their work. Since Peace Direct already loves CPBR, it was an informal opportunity for Dishani to teach her younger colleague on how to speak to future funders and new partners. Over lunch, Dishani expressed how she would like to have others promote and advocate the work of their organization while she takes on an advising role. Dishani’s trust in Sajani’s leadership abilities and her commitment to sharing her knowledge highlights the importance of peacebuilding as intergenerational.

Real peacebuilding not only recognizes the efforts of activists and movements in the past; it also lifts up the efforts of the future generation that may not be fully mature or organized yet.

In our goals and trajectories for peacebuilding, have we really put down a deadline for achieving world peace? Perhaps implicitly, we have all accepted that we will not see complete peace in our lifetimes and yet we experience surges of movements fighting for equality and justice. We hope that others will take on our mission of peacebuilding when we are gone, but we must be aware of the things we can do while we are still here. Real peacebuilding not only recognizes the efforts of activists and movements in the past; it also lifts up the efforts of the future generation that may not be fully mature or organized yet. It would be a disservice to peacebuilding if we are unwilling to share these positions of leadership with younger and less experienced peacebuilders.

Why call it peacebuilding?

Intentionally being inclusive in goals and experience isn’t groundbreaking; social movements like Occupy Wall Street have shared their platforms with other groups in the past. But it is important that we give a name to these instances where we join efforts as peacebuilding because it reminds us what we are all working toward: peace.

Peace Direct dares to take it a step further by identifying these different organizations geographically on our peace mapping website, Peace Insight. (Shoutout to the U.S. mapping – now in its third year!) By joining our mapping initiative, we hope other movements see their work to change systems of oppression in the larger effort of peacebuilding. The movement against climate change, the movement recognizing the agency and rights of indigenous peoples’, and the anti-war movement may have specific tangible goals, but all outcomes result in a shared, peaceful world.

I suppose peacebuilding will always be difficult to define because peace is hard to define. I see peace through one perspective, but it looks different to someone else because our lives are not the same. Perhaps a good indicator of peace is that it can exist without destroying another person’s peace.

Achieving peace is a lofty goal, but when we recognize another movement’s work as building peace, we remind ourselves that we are not alone. It is important to respect all movements’ efforts and support each other when possible. The moments these efforts intersect are moments of peacebuilding; it remains an uphill battle but when you build anything, the only way is up. 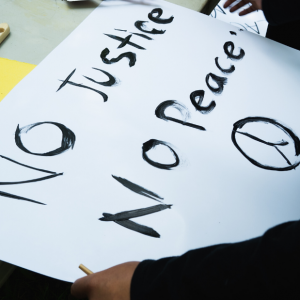 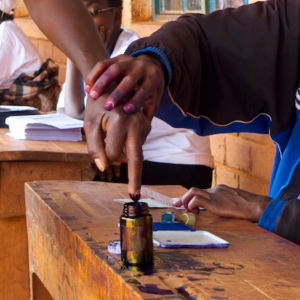 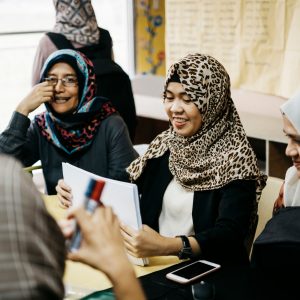