In August, at least 42 civilians were hacked to death with machetes in Beni, Eastern DR Congo. It was not the first time such violence has taken place, and it may not be the last. So how can the killing be stopped? Peace Direct has released a briefing on the situation in Congo.

“They hacked him and put him in a pigsty,” a survivor told Al Jazeera. This terrifying report emerged from an attack by an armed group on the town of Beni, Eastern DR Congo, on Saturday 13 August. It was not the first time Beni has been targeted. Scores of people have died in several different atrocities in 2016 alone, and at least 1625 people have been killed in the North Kivu region during the last 24 months.

The killings take place amid ongoing instability and endemic armed conflict in the Great Lakes region of central Africa, with a complex and changing picture of violence. But this does not mean that nothing can be done. Peace Direct has spent more than a decade supporting local peacebuilders in Eastern Congo, with notable success in rescuing and reintegrating child soldiers from the type of groups involved in the Beni attacks.

Peace Direct has also advocated for the integration of a civil society strategy into the International Security and Stabilization Strategy for DR Congo, which attempts to co-ordinate much of the international community. The results of all this work feed into the steps identified in this paper, which can contribute to local peacebuilders better influencing events in Beni and the surrounding region. This will not be quick or easy, but we know that there is enormous potential within already-existing civil society to mitigate, respond to and ultimately prevent further atrocities.

So how can the killing be stopped? Peace Direct has released a briefing on the situation in Congo.

Click on the pictures below to view the report in English and French. 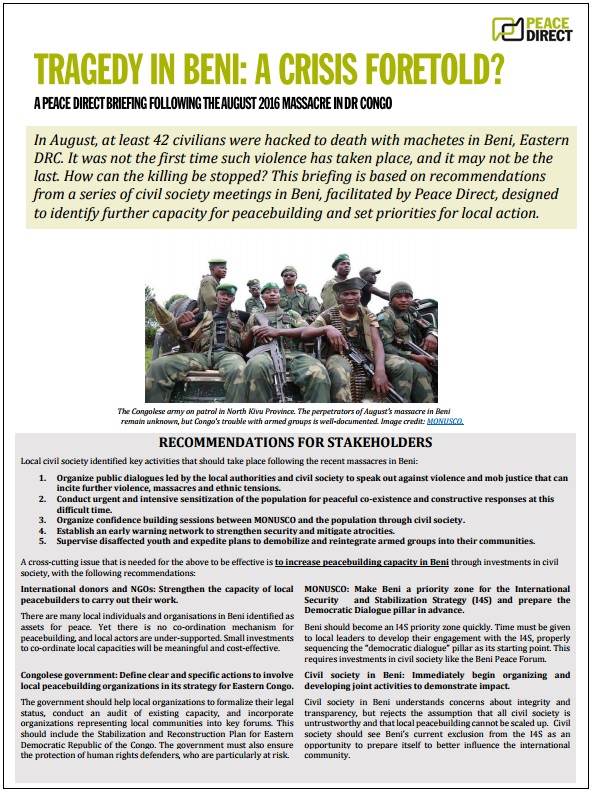 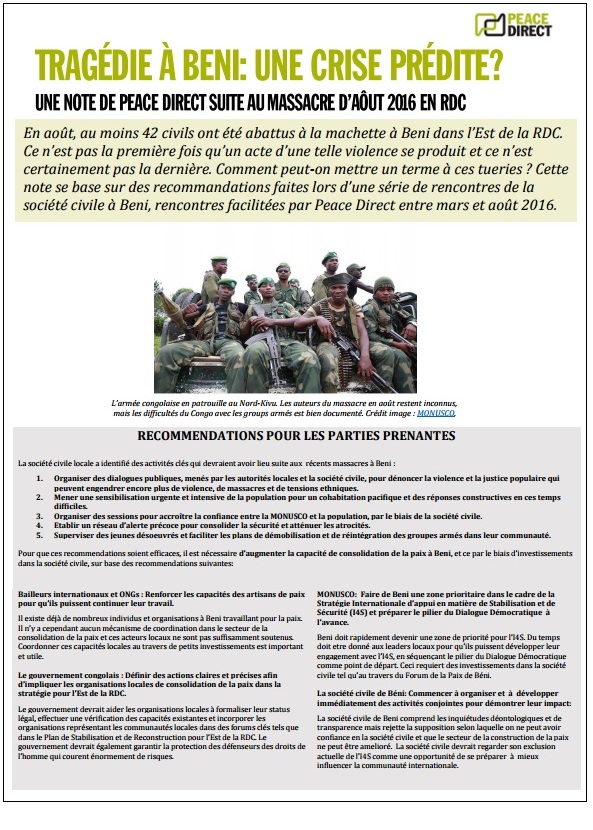 This week, we are reflecting on the importance of mental health in peacebuilding.  Read more »

Today marks the end of Ramadan and Eid al-Fitr. Our partners and friends around the world have been observing this holy month reflecting on peace, cohesion and community. Read more »