Batoul is 16 years old and lives in Syria. She is the only girl in a family of three brothers. Over the last nine years, she and her family have been displaced three times, moving from the countryside of Idlib to the city of Kafr Takharim. Through a creative activity run by Peace Direct’s local partner, Hurras, Batoul has found her confidence once more, and her belief in peace.

Due to the war in Syria, Batoul and her family had to move several times and adapt again and again to each new host community, make new friends and rebuild their lives. The constant changes left her feeling isolated and unmotivated.

When Batoul first joined the training group as part of the Youth Peacebuilding Initiatives project run by Peace Direct’s local partner, Hurras, she felt unable to join in and introduce herself to the rest of her colleagues. Her mother, who took her to her first training session, told us that she had become introverted, even when visitors came to the house:

She has lost her trust in others since we were displaced for the third time from our home due to the unstable security conditions. Batoul was forced to leave her school in the countryside of Aleppo and her friends…and she lost many of her relatives.

Batoul did not show any interest in getting to know the other young girls or participating in the group’s activities until the third session. The efforts made by the trainers had a great impact on Batoul finding her confidence to participate once more.

In one of the sessions that brought together a group of young displaced people and new residents of Kafr Takharim, many ideas were presented on peacebuilding. One of the ideas that the working group agreed on was an initiative to raise children’s awareness in an engaging, fun and creative way. The children were encouraged to draw on the wall using their own words. In this initiative, a group of young women (both displaced and resident) with creative talents drew a mural in the Child House Center. 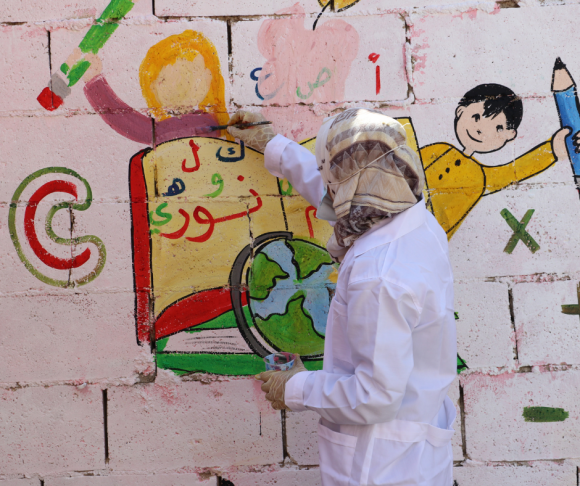 The Centre, supported by Hurras, provides care for a large number of children who have been displaced and orphaned by the war in Syria. The team works in cooperation with the artist and painter Aziz, who expressed his admiration for this youth initiative and supervises the youth group on a voluntary basis.

Photo: a young woman drawing on the  ‘Peace Wall’ in Kafr Takharim, Syria.

Since Batoul joined the initiative, the team has been working to create a safe environment that would help her find ways to overcome her shyness, and interact with other young people. In the first session of the project, Batoul did not have the courage to reveal her name to the rest of her colleagues. Now, she participates with a group to deliver many peacebuilding messages across her community. Through the drawing wall, young people like Batoul are encouraged to express themselves, come to terms with their experiences, and find their voices once more. By participating in this peacebuilding project, Batoul discovered her passion for media.

Through the drawing wall, young people like Batoul are encouraged to express themselves, come to terms with their experiences, and find their voices once more

Batoul hopes to complete her media studies and to continue conveying the voices of the youth in her city to the whole world. She wants to share the message that despite all the effects of the conflict that young people suffer from, the strength of their belief in peace will remain stronger. 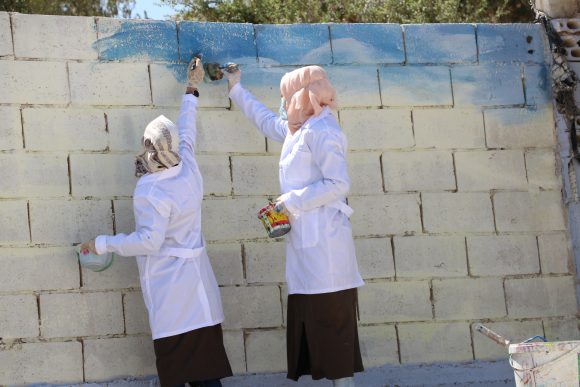 Photo:  young women in Syria begin painting the ‘Peace Wall’ a project developed to provide young people affected by war a space to express themselves and find their voices.

She wants to share the message that despite all the effects of the conflict that young people suffer from, the strength of their belief in peace will remain stronger

Batoul says: “There is strength in every boy and girl my age, don’t allow anyone to doubt your abilities. All you have to do is find supportive friends and believe in your abilities.”