As the British government unveils new plans to tackle the ‘poison’ of terrorism, our partner Aware Girls continues its campaign to stop young people from joining violent extremists in Pakistan – and its approach has lessons for the UK. 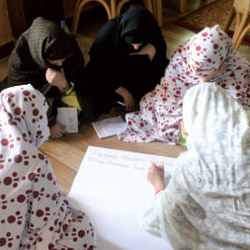 As the British government unveils new plans to tackle the ‘poison’ of terrorism, our partner Aware Girls continues its campaign to stop young people from joining violent extremists in Pakistan – and its approach has lessons for the UK.

Across Pakistan, over 50,000 people have died in terrorist attacks in the last decade – and many of the perpetrators were aged under 30. In Aware Girls’ own province, 31 people were killed and 63 injured in suicide attacks in the first half of 2015 alone.

Aware Girls was founded by two teenage sisters ten years ago, and is still run and staffed by dedicated young people. To reach their peers, they send teams of young volunteer peace educators to villages, towns and schools, where they can identify individuals likely to join extremist groups – and dissuade them.

This work is personalised and intensive. It includes study groups to spread the word (pictured below), and one-to-one counselling sessions that may last weeks until a young man or woman alters their views and choices (see case study, right). By changing the mind of just one young person at a time, Aware Girls saves the lives of potentially hundreds.

In 2014 its trained activists reached almost 4,000 ‘at risk’ young people. Over the last ten years it has expanded from the north-western province of Khyber Pakhtunkhwa to the turbulent tribal areas of FATA, and last year started projects across the border in Afghanistan. This work has been recognised with awards in the USA and UK and an invitation to Washington from President Obama.

“The Aware Girls approach is based on the simple idea that the best way to prevent young people from being attracted by violent or extremist movements is by reaching them through other young people,” says our Asia specialist Ruairi Nolan.

“They know the ways their peers can be recruited and have the trust and influence in the community to persuade them that another, more peaceful way is possible. This is a lesson applicable to the UK or any society affected by extremism.”

Since the onset of the global pandemic, we have been supporting local peacebuilding groups to take their work online using technological tools. 233 grants were awarded as part of a Digital Inclusion Fund. This International Women's Day, we celebrate how women have kept their work going this year. Read more »

Despite the impact COVID-19 poses to civil society and our collective ability to respond to conflict, we are resolute in continuing support for those communities around the world who are most affected. Read more »

The Foundation for Integrated Rural Development (FIRD) is a women-led organization based in Northern Uganda. They work to prevent violence against women and children, improve community life, and promote greater respect for human rights. Read more »