Humanitarian workers are risking their lives to stop this suffering. And it is those on the frontline, the local people making a real difference in their communities, the invisible heroes, who are increasingly being targeted. To mark World Humanitarian Day and World Photo Day, we are showcasing some of the most powerful photos of people building peace in war zones.

Around the world, war destroys lives and causes huge suffering.

Millions of civilians, people like you and I, are forced to flee, to run, to hide, or watch their homes become the rubble of a war zone.

And the long term effects like famine, children missing school, communities torn apart can be just as deadly as one bullet.

Humanitarian workers are risking their lives to stop this suffering. And it is those on the frontline, the local people making a real difference in their communities, the invisible heroes, who are increasingly being targeted.

To mark World Humanitarian Day and World Photo Day, we are showcasing some of the most powerful photos of humanitarians building peace in war zones.

At Peace Direct, we speak out so that people suffering because of war are recognised and given the attention they deserve. We won’t stop until those in power are responsive to the needs and rights of people in conflict. Peace only lasts when local people are part of the solution.

Take part in the global campaign this year by following #NotATarget. Show your support for those saving lives on the frontline, at huge risk to their own. 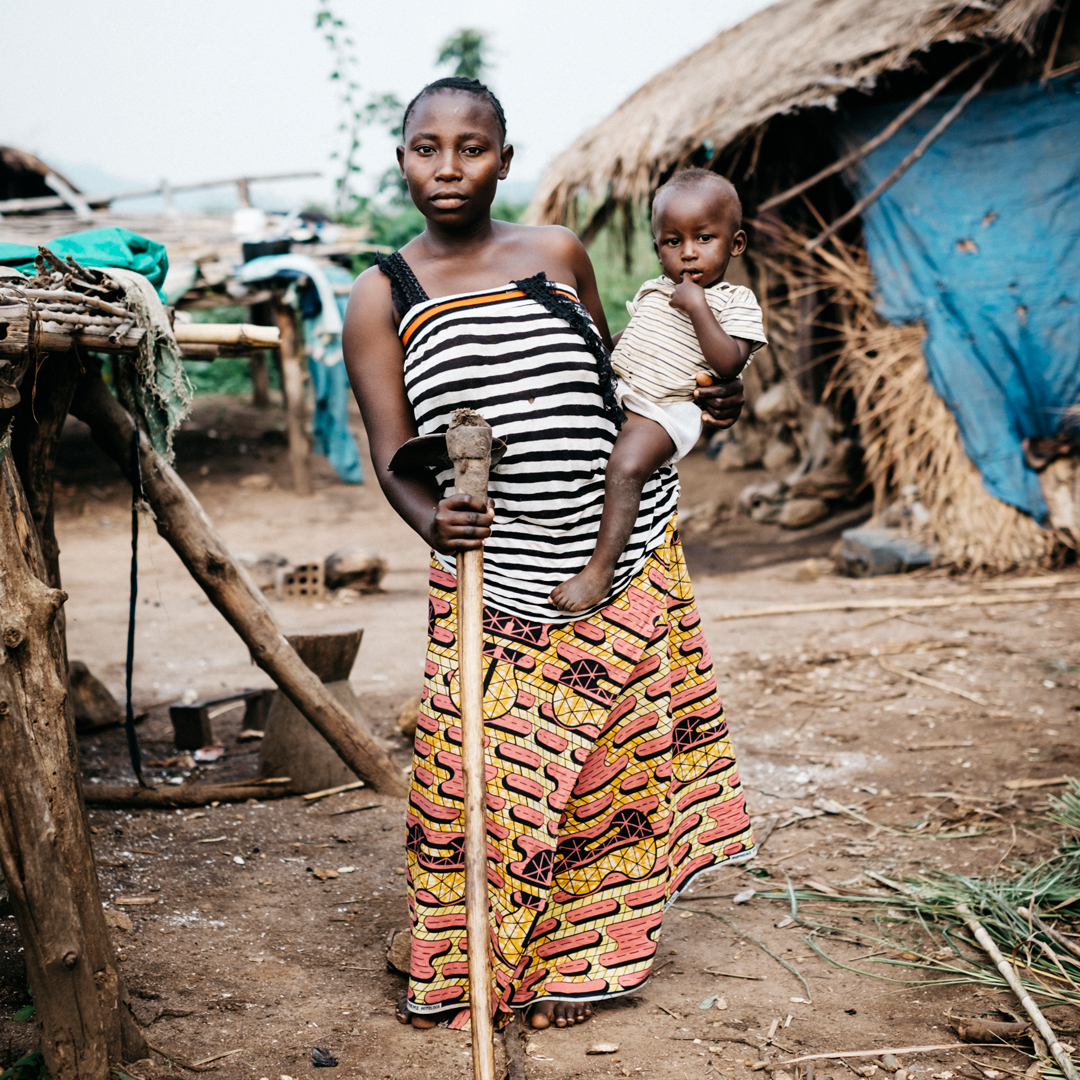 Ida, aged 33, was displaced during an outbreak of war in DR Congo. She walked for miles from her village of Bunia to a new village called Erengheti. At first urgent aid and shelter kept her alive. But once this ended Ida was desperate.

But one local organisation, Centre Resolution Conflits found Ida just in time. A $60 micro loan helped her buy a goat and set herself up selling local produce like cassava.

Now Ida has three goats, owns some land and is even working towards building herself a house.

Local organisations have access to people suffering because of war that others cannot reach. They are the first responders and must be given the support they deserve. 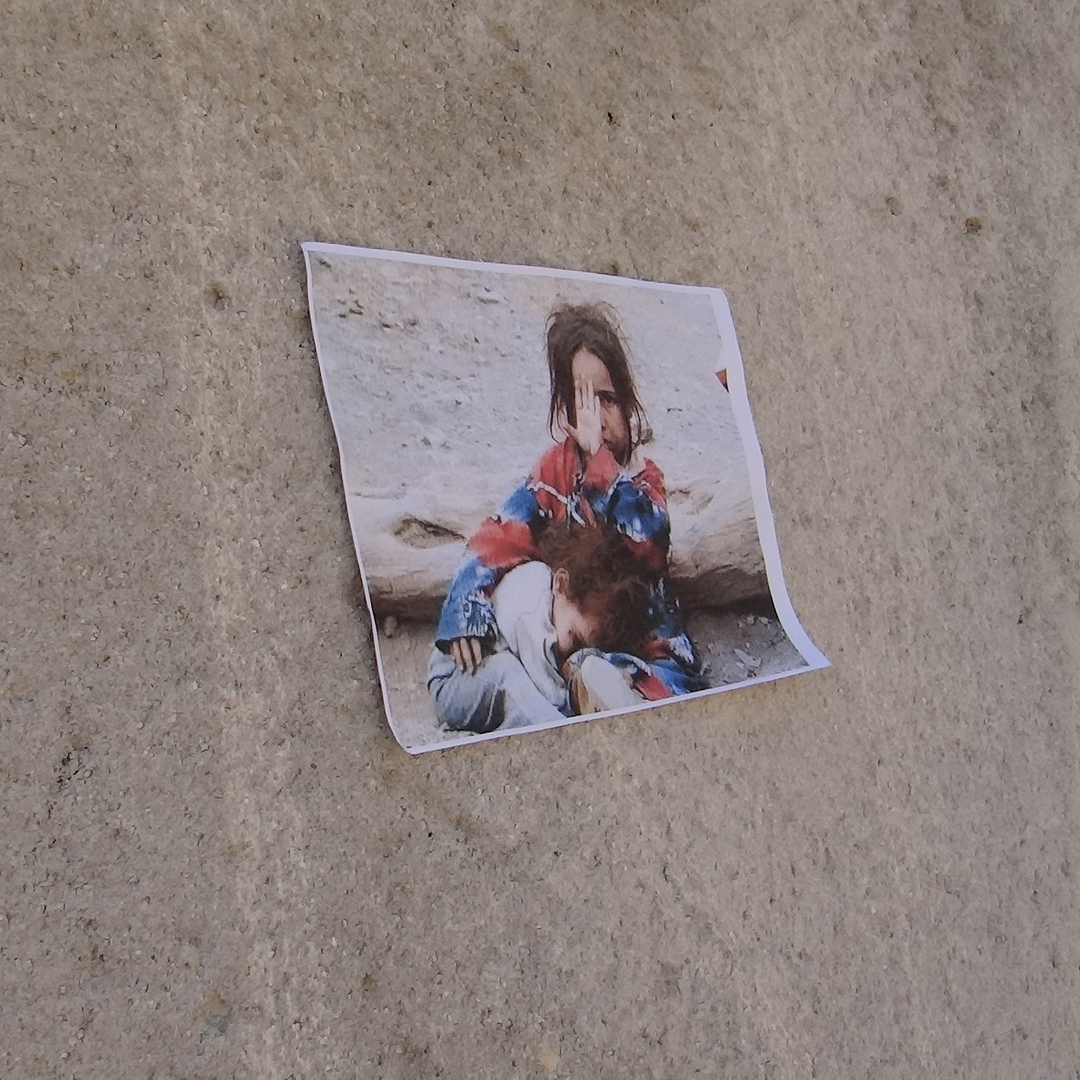 A picture within a picture documents the suffering of children in the Syrian conflict. Plastered to a wall in the Idlib region of Syria, this photo emphasises the shocking brutality of the conflict, but the bravery of local activists saving lives and rebuilding in their communities.

This was part of a public awareness campaign run by our local partner in Syria to call for a reduction in the spread of weapons. Concerned by the destruction around them, our partner committed to raise awareness of the dangers loaded weapons can have, particularly for young people and children who may not immediately see the danger.

Learn more about our work in Syria on our website. 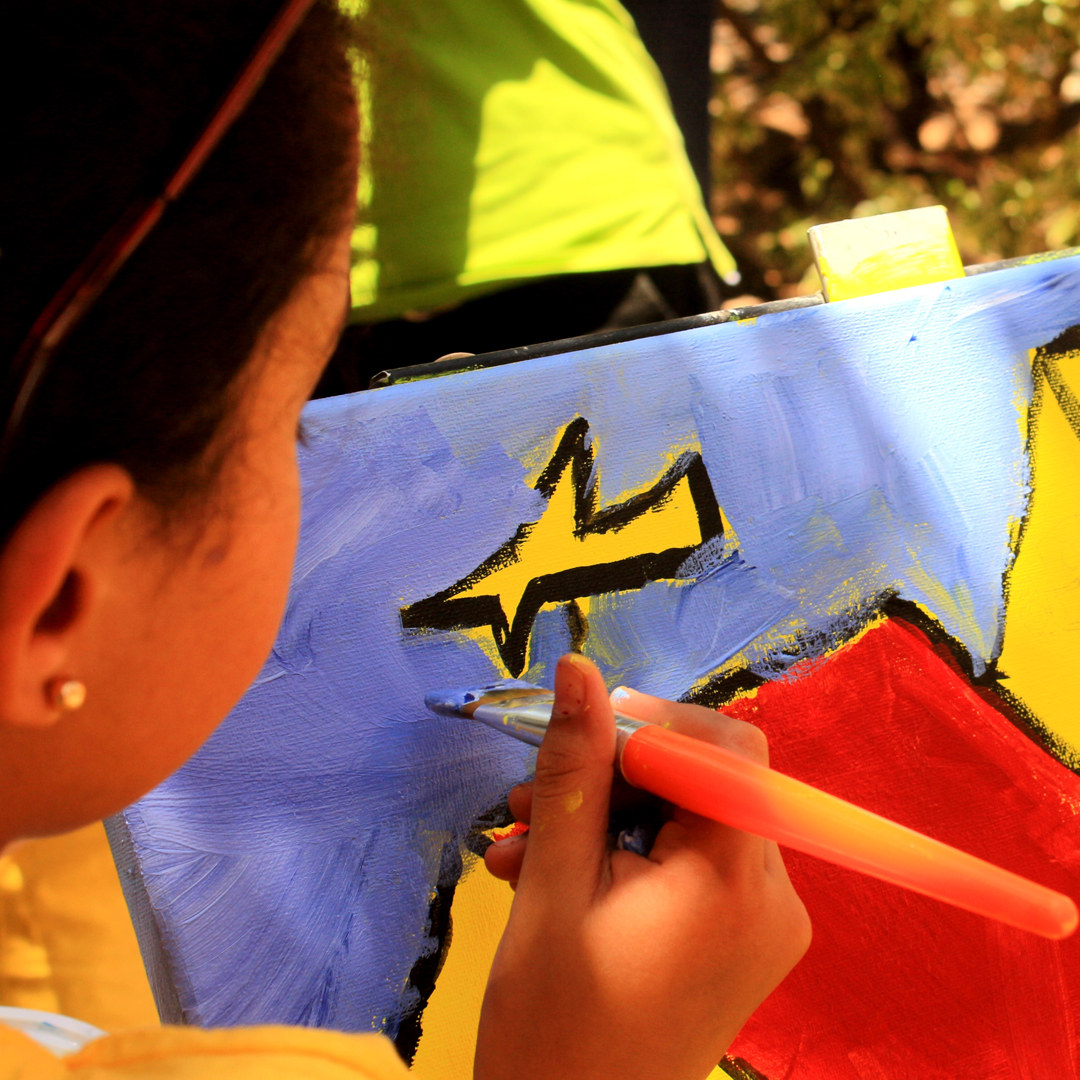 In the photo, a young child living in Yemen is about the draw the bombs dropping from an aeroplane as it flies above a village.

This picture is from a pilot project in Yemen, a workshop allowing children to reflect on the terrible experiences they are undergoing in the conflict.

The workshop brought together students from 15 schools to talk about the war and the conflict in the country, under the supervision of sociologists and psychologists.

Then, for three days, they all sat together to draw their ideas and feelings with the help of young professional Yemeni artists.

The workshop, called “Green Ideas and Colourful World,” ended with an exhibition. The results were devastatingly beautiful, revealing the perspective of children on the war through their graphics and images.

The local peacebuilder leading this workshop said: “Amidst this chaos, the children’s bright and dark colours reflect both reality and expectations – their visions and aspirations. The portraits are a transparent testimony to the world through the eyes of innocents, sending a message that they cannot tolerate what is happening, that despite their pain, they are dreaming for peace.”

For more on Yemen, read out latest Peace and Conflict report. 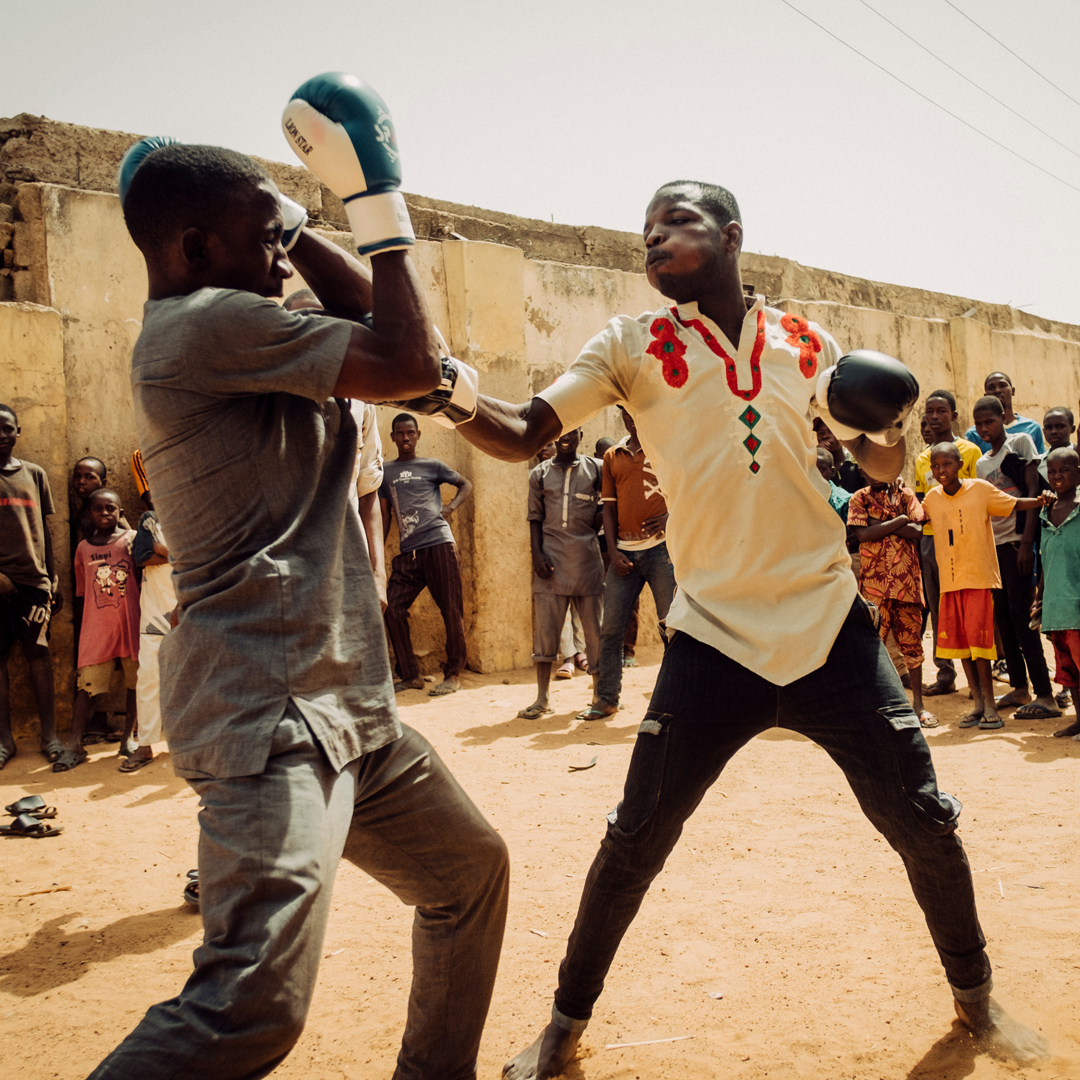 In northern Nigeria, one local organisation has found an innovative way to support those who have suffering at the hands of militant group Boko Haram. Using boxing as a tool to build peace.

The association was set up to support those leaving Boko Haram, or other criminal gangs.

It’s a lifeline for people like Nura and Auwal but remains seriously underfunded.

Read more of this story here. 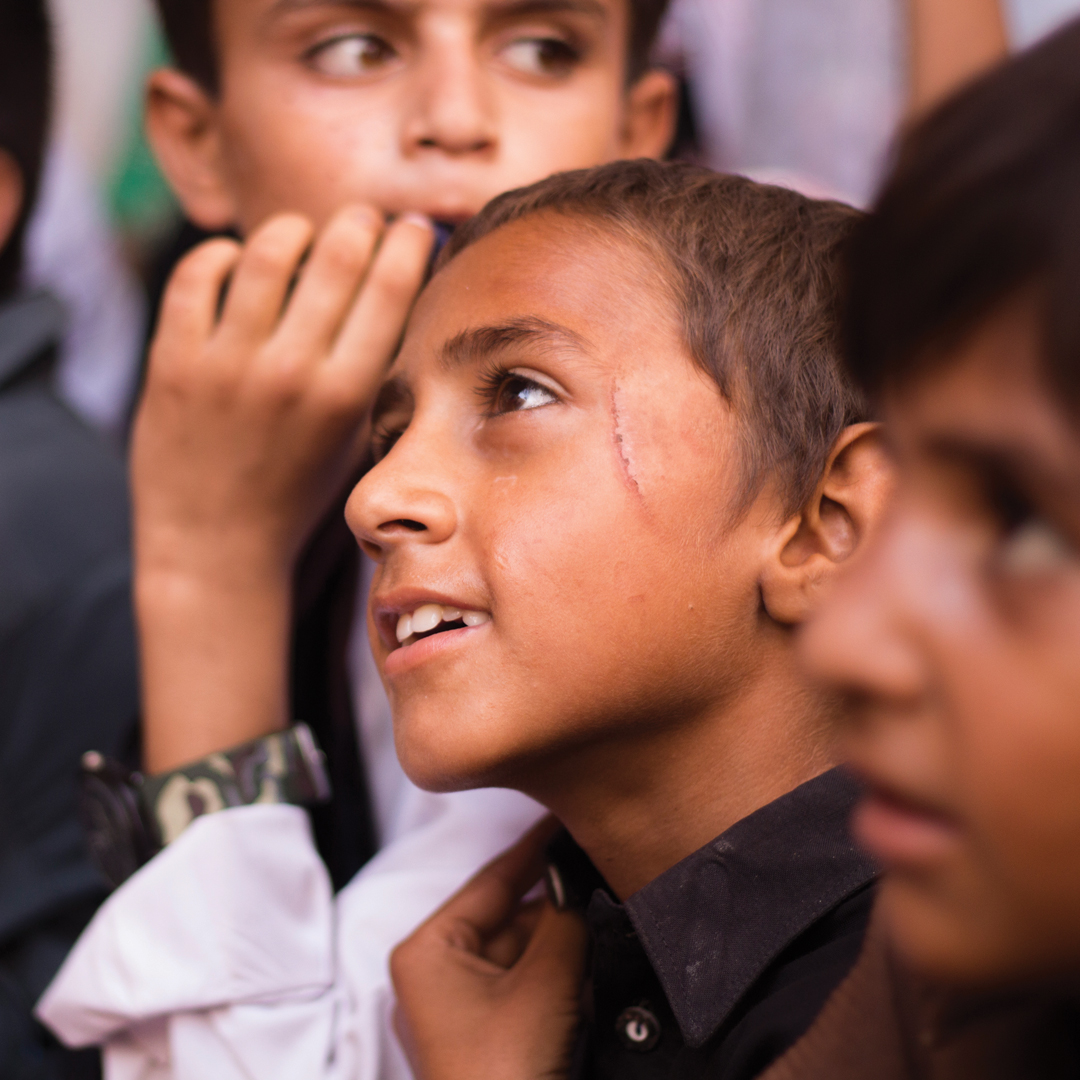 Young boys in Pakistan here listen to a community talk on the importance of the role of men in stopping violence against women, advocating for human rights and building a peaceful society.

In Pakistan, violent extremism which has taken more than 50,000 lives in Pakistan in attacks in the last decade. But this is not the only story.

Two sisters have built a movement that has already given 10,000 young people the choice of a more hopeful and peaceful future, providing a path out of violence and dissuading youth from joining extremist groups.

Preventing deaths by stopping conflict before it starts and ending recruitment into militant groups saves many more lives.

Watch a TEDx Exeter talk from the founder of this local organisation Aware Girls here.