A complex web of issues cutting across society make the many conflicts in Nigeria challenging for peacebuilders to navigate. The general elections in May 2019 added another layer of complexity; marred by tension and political violence; while the Boko Haram insurgency in the northeast continued into its tenth year. It’s within this myriad of struggles that our partner, Peace Initiative Network (PIN) works with youth to address the roots of conflict – reducing recruitment to armed groups, tackling voter manipulation and helping to dispel suspicion and rivalry between different ethnic and religious groups.

A game plan for peace

In 2019, 152 young people received vocational training, grants and equipment for a variety of trades, helping to grow income and business across the community. According to participants, having a valuable skillset was transformative in removing the financial and social incentives drawing them to armed groups – primarily boredom, and the money offered by gangs and terrorist groups to perpetrate violence. 18 participants then went on to train 46 others, showing how this project will have a ripple effect for generations to come.

Members of the community in Kunya, one of the project areas, told us that before PIN’s work started there was lots of violence in the region. It was caused by things like politics and football; always happening at the end of matches. But when PIN arrived and conducted a three-day workshop for the coaches and captains of the teams, the young people learned how to control, manage and resolve conflicts as they occurred.

These coaches then went on to train other coaches from other towns in nearby areas. After this there was absolutely no violence at football matches in any of the surrounding areas. PIN later returned and followed up with guidance on peaceful coexistence.

PIN’s work in Kunya does not end with football. Every quarter they have multi-stakeholder meetings where they discuss what to do about community issues, so violence doesn’t flare up. Civil defence, police, vigilantes, youth leaders, and everyone in the community are all present at these meetings, creating lines of accountability downwards and upwards. It seemed like that was the crux of why violence had totally stopped in Kunya. A community leader told us “People don’t want to be shamed – PIN have created accountability mechanisms for bad behaviour, in a culture where positive image matters.”

In their words: Michael's story 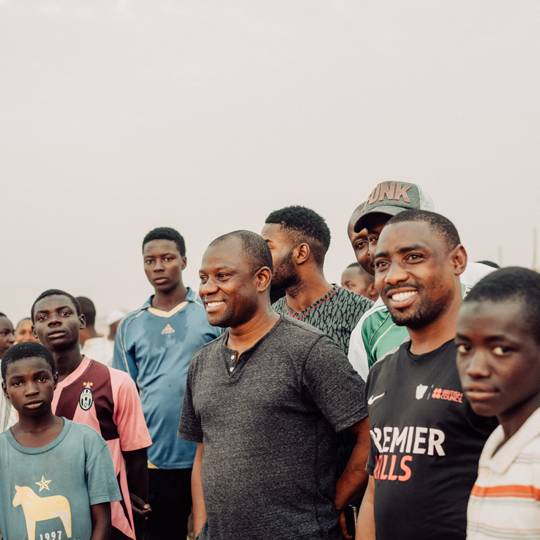 “I am Christian and was born in Lagos, but have lived in the community in Kano in the north for 19 years. After all this time in Kano, somebody decided I should be attacked and tipped off a militia to come and do it.

That day at 10am I came back to my house. My wife and brother were both out of town so I was alone. I noticed that the whole neighbourhood was quiet, the shops were all closed. I felt danger.

I locked my house and went into the streets to see what was going on. When I reached the main road I saw about 100 young boys coming for me. I managed to run to my neighbours who were Muslim. They hid me. I was at their house for four hours. I could see the smoke from them setting fire to my house and my car. Eventually, the police came and took me to a safehouse.

I had lived in the neighbourhood for 19 years and I was seen as a stranger. But I did not want to take revenge. I knew I must do something positive. I needed to forgive, move on and change the trend towards violence. So other members of the community and I, who had all had similar experiences, set up an organisation to work with young people on leadership, peace and identity – to stop this happening again.”