Khadija was born in Kismayo, Somalia. Her experience of the Somali civil war helps us to understand the instrumental role played by women in constructing, sustaining, and most importantly resolving conflict. She shares how she has swapped her spot on the battlefield for one at the table of peace.

This brave and honest story comes from a joint study on women in conflict and peacebuilding between Peace Direct and the Life & Peace Institute, with their respective local partners in Kismayo, Somalia. Our local partner SADO (the Social-life and Agricultural Development Organisation) works to reduce violence, to provide alternatives for young people at risk of joining militant groups, and to encourage young people and women to play more active roles in social and political life.

This is Khadija’s story

My name is Khadija and I was born in Baidabo in central Somalia. I arrived in Kismayo, in the Jubbaland region during the early years of the conflict, in 1991. I am now 27 years old.

Besides the fighting, problems were many; for example, there was famine. Women have a lot of problems when men fight. We could not leave the house. There were women who threw themselves into a well out of fear.

I was born into the Mareehan-Darood clan community. My clan has been involved in several conflicts. I was a trader back then, before the war. I used to sell clothes that I imported from the capital Mogadishu. I used to bring them to local women who sold them on. When the conflict started, other traders and I gathered our belongings together and arranged for a militia to protect them. I organized a militia group from my clan community and together we paid for their lunch, khat (a flowering plant native to Somalia) and accommodation. We told them we would pay for this and in exchange they would guard our property. For seven days and nights, I was on stand-by, sleeping among the militia in front of the store to protect our property.

Women have a lot of problems when men fight. We could not leave the house. There were women who threw themselves into a well out of fear.

We women also played a part

After two years, however, another conflict erupted in which my clan community was pushed out of town. We were defeated and lived in the countryside. Whenever clans fight, be they big or small, some lose and others win. Even big clans are negatively impacted. They are not spared from injuries, killings and revenge. This affects their women, too. The newly powerful clan in town says, ‘Women of this clan should be killed just as our women have been killed.’ So when my clan was pushed out, whereas before I had been safeguarding other women, I became a target. God saved us, however. By His mercy, we survived.

The war impacted us women but we also played an active part in the fighting. I used to have my own gun. Me! I was part of the fighting. I got involved even before some of the men did. Upon arrival, I was told to fill the empty spot, the gap in the firing line. I was part of them, like normal – switching places with men like any other male fighter. There is only little understanding or knowledge that there are many females who took up guns and actively fought alongside men. Women participated in the war, and the same rules applied to them, too. They took guns, went on technicals, fired guns, injured, killed, finished off the wounded.

I used to have my own gun. Me! I was part of the fighting. I got involved even before some of the men did. 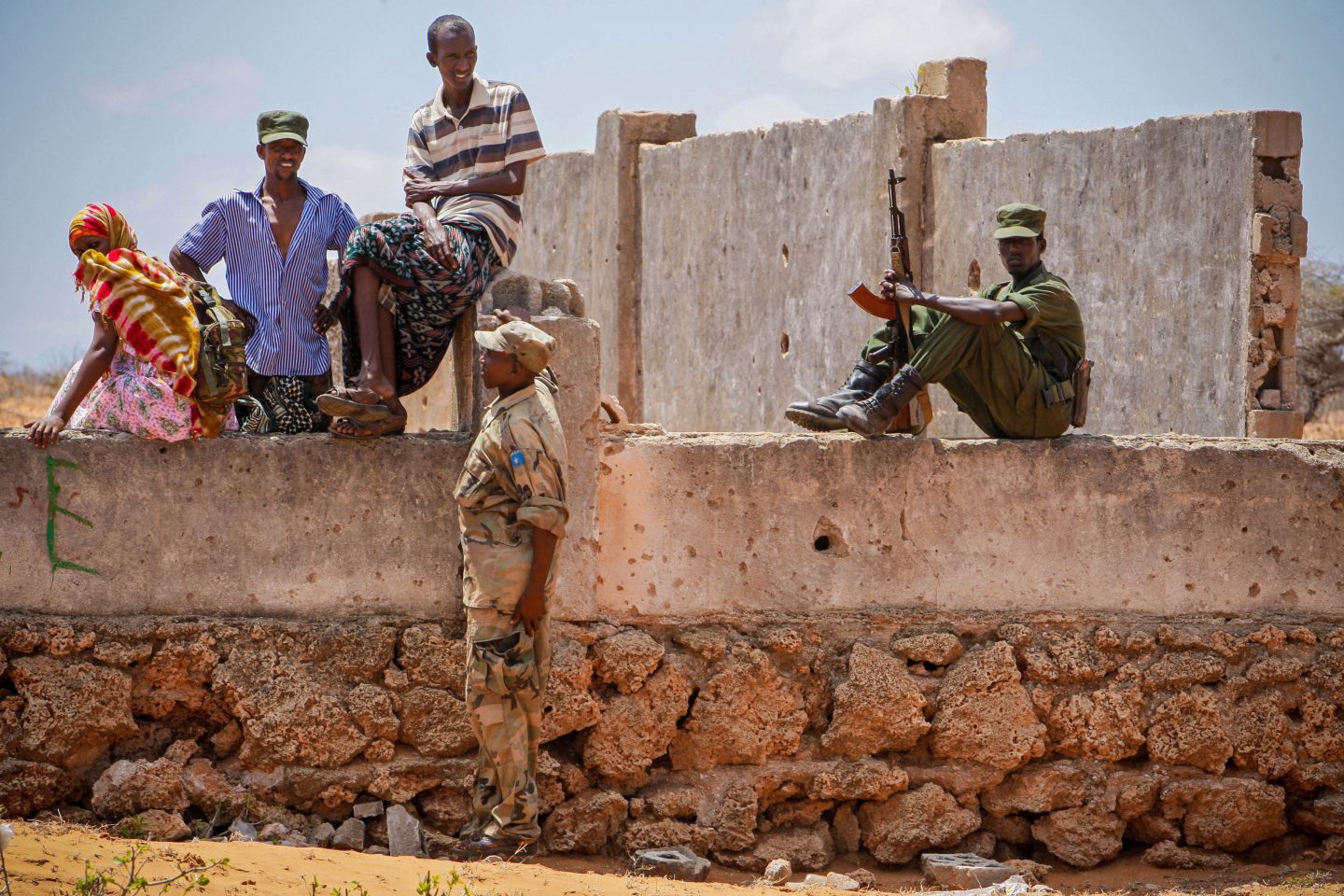 When you hold a gun as a woman, people think you are weak. That it is a weakness. You are seen as something bad. They develop the same fear for you as the fear they have of men who carry guns. That is for sure. Your neighbours will not support you or feel free to talk with you. They will hide from you. Just like they are afraid of men, they will be afraid of you. If the women carry guns, they are afraid of them as much as people are afraid of men. This is clear.

Now I stand for peace

Yesterday I was carrying a gun for my community. But having this active role meant I was also defending the property and belongings of the other girls and women I knew. When I saved and protected their belongings, they no longer saw me as bad. They saw that I helped them, that I was a peaceful person. The bad they used to see has been destroyed by this good, by saving and protecting others. By being more involved in my community and having an opportunity for dialogue with other women, it is an opportunity to put the past to rights – to share pain and hurt, in some cases guilt and shame; but also the paths to peace.

Today, I have exchanged my spot in the battlefield with a loud voice at the table of peace. The white veil I sometimes wear? It stands for peace. I was preaching for peace among women, in refugee camps and to politicians, as well. I have many flags – the Somali flag, the Jubbaland flag, the one for peace. They are all at my place. All of them are there. And it is obvious I stand for peace.

Today, I have exchanged my spot in the battlefield with a loud voice at the table of peace… I have many flags – the Somali flag, the Jubbaland flag, the one for peace. 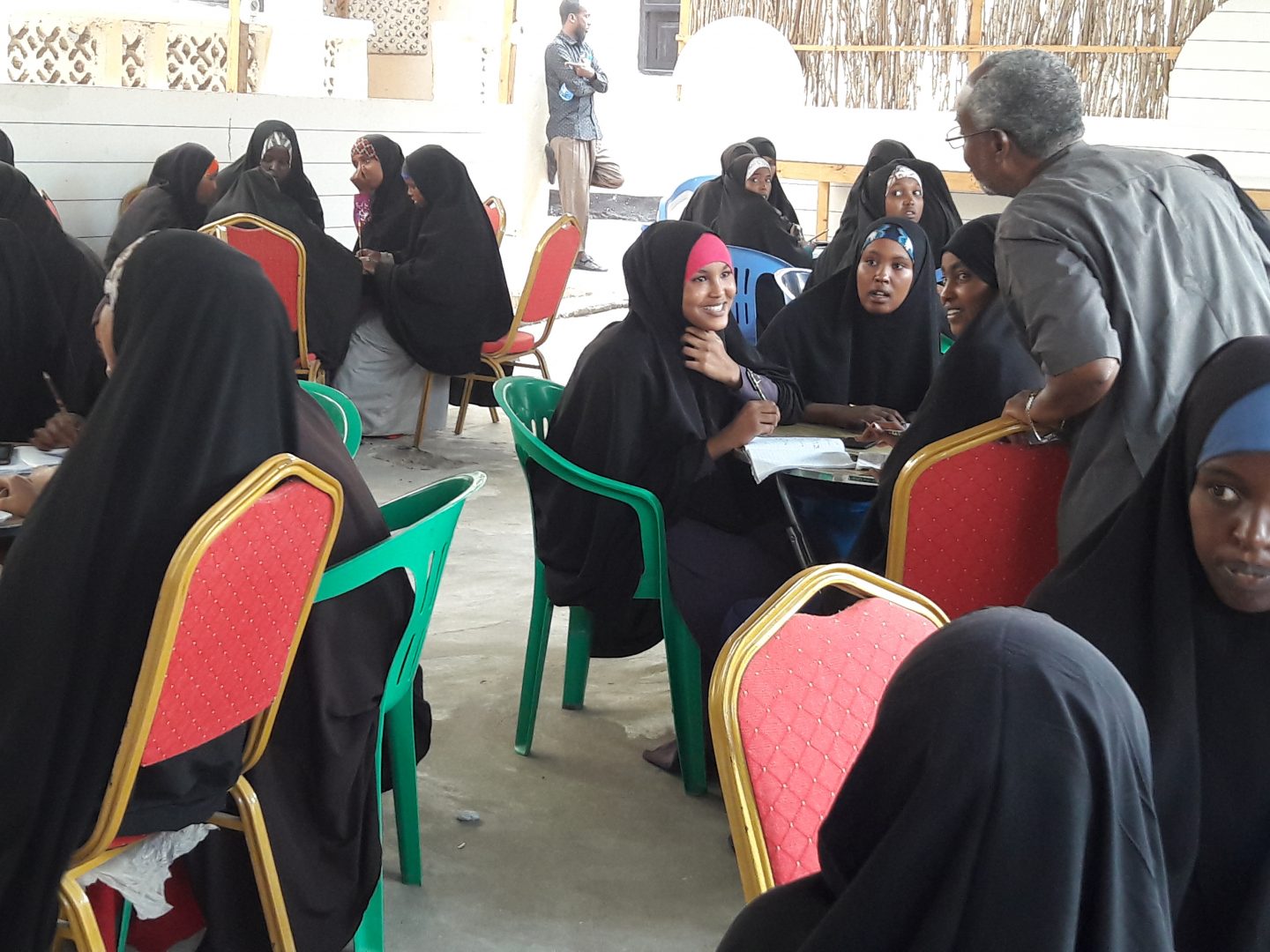 Today, Jubbaland is one the most peaceful places in Somalia and that is because of women. The president said that he is women’s closest friend. We have his word. He agreed to our request to have a representation of 30 per cent women as members of parliament in Jubbaland. He agreed to this quota and we got it. We also went to the national federal government. We beat on the table. We even composed a poem: ‘If we don’t get our 30 [per cent], we will ask for our three’ [a woman who asks for ‘her three’ is a woman asking for a definitive divorce].

I will beat on the table and sit firmly. I want my daughters to sit at the table of peace too.

I want them to take my courage to stand for peace. That they stand for their country, their people, their women. And never participate in any fighting.

I want them to never ever take up a gun for a war of ignorance; a war of clan.

Peace Direct, the Life & Peace Institute (LPI) and the Somali Women Solidarity Organization (SWSO) recently published a research report into the roles of women in conflict and building peace in Somalia. The findings deepen our understanding of how Somali women play an instrumental role in the construction, prosecution and resolution of violent intra and inter-clan conflict. This story is part of a compilation of ‘Life Stories’ that provide first-person narratives of women’s experiences of the Somali civil war. Delving into women’s collected memories, we hear and see the war through the lives of ordinary women.

In Universities up and down the UK, our Student Ambassadors are spreading the word about local peacebuilding. They use their skills, energy and enthusiasm to build a better, brighter future for people living in war zones. Meet some more of our Ambassadors here. Read more »