“We transgender people are always discriminated against and face a lot of harassment in all spheres of life… But when we joined TRP, we came to know that we have all the rights as the citizens of Pakistan”.

Transgender Rights Consultants Pakistan (TRCP), is working towards creating equal opportunities, and an environment free from discrimination and stigma for transgender communities. TRCP receives support from our Youth Action for Peace small granting project through local partner Chanan Development Association (CDA). Nayyab is the Executive Director of TRCP. They shared their insight into life for trans people in Pakistan, and how funding from Peace Direct through CDA has helped their journey towards inclusion.

The transgender community in Pakistan often faces discrimination and violence, and are not afforded basic human rights. Whilst an exact figure is unknown, the leader of Trans-Action Alliance shared that since 2015, 91 transgender women were killed in just one province of Pakistan. Despite the relatively progressive laws for transgender people, they are afforded little protection in reality. Pakistan is in fact one of the only 12 countries worldwide that recognises transgender identity on their national ID cards. Five years ago, Pakistan passed legislation guaranteeing basic rights for transgender citizens and outlawing discrimination in its 2018 Trans Protection Act. So why is there such a big gap between policy and protection?

Transgender activist Saro Imran spoke out on this issue. They shared how “Transgender people, and transgender women in particular, face harassment, mistreatment and exclusion from society, from the public health care system, education system, employment and other institutions of government.”  Small organisations such as the TRCP exist to help with these issues. However, they still face barriers when it comes to funding.

Transgender people, and transgender women in particular, face harassment, mistreatment and exclusion from society, from the public health care system, education system, employment and other institutions of government.”

“Our organization has been working tirelessly for the implementation of the Trans Protection Act 2018. We have advocated a different forum for the proper implementation of the law. But since we had limited resources available, the scope of our work was also limited.” The hard work which contributed towards achieving the implementation of this act has slowly started to change things in Pakistan, but just because the law exists, does not mean inclusion and protection have been achieved. There is a long way to go before proper inclusion of trans gender people within society and acknowledgement of basic human rights is realised. 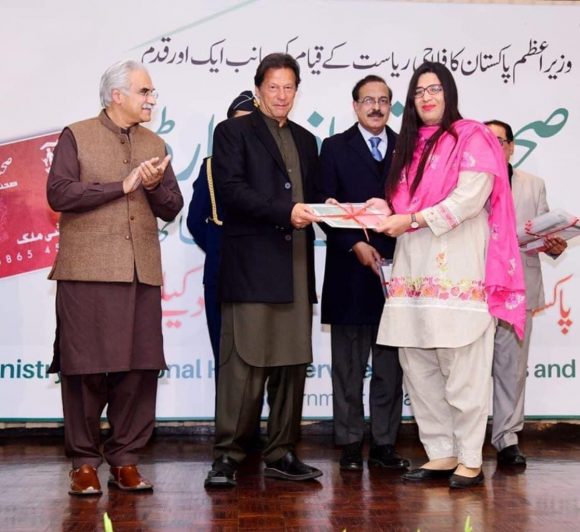 The flexible funding received by TRCP has opened doors for them, helping them to engage in capacity-building activities and allowing them to take part in conversations with various government departments surrounding inclusion. They have been able to quickly respond to the situation surrounding them. TRCP has even influenced the ability and range of employment opportunities available to members of the transgender community. Nadra, a transgender person, who used to be part of TRCP told us that, “when jobs were announced in the DC office Islamabad, we asked Nayyab to support us. She talked to the relevant people and today I have respectable employment in a government office. A few years ago, no one could have imagined that”.

The flexible funding received by TRCP has opened doors for them, helping them to engage in capacity-building activities and allowing them to take part in conversations with various government departments surrounding inclusion

We are grateful for our ability to provide flexible funding to our partners, allowing them to empower local organisations like TRCP to address the needs of their communities. Thanks to the work of TRCP, the opportunities of those in the trans community in Pakistan have been improved.