Now in its fifth year, our Tomorrow’s Peacebuilders awards offer global recognition for grassroots peace activists in war zones around the world. These are the only global awards for local peacebuilders – inspiring individuals who are building a better tomorrow in the world’s most fragile places. 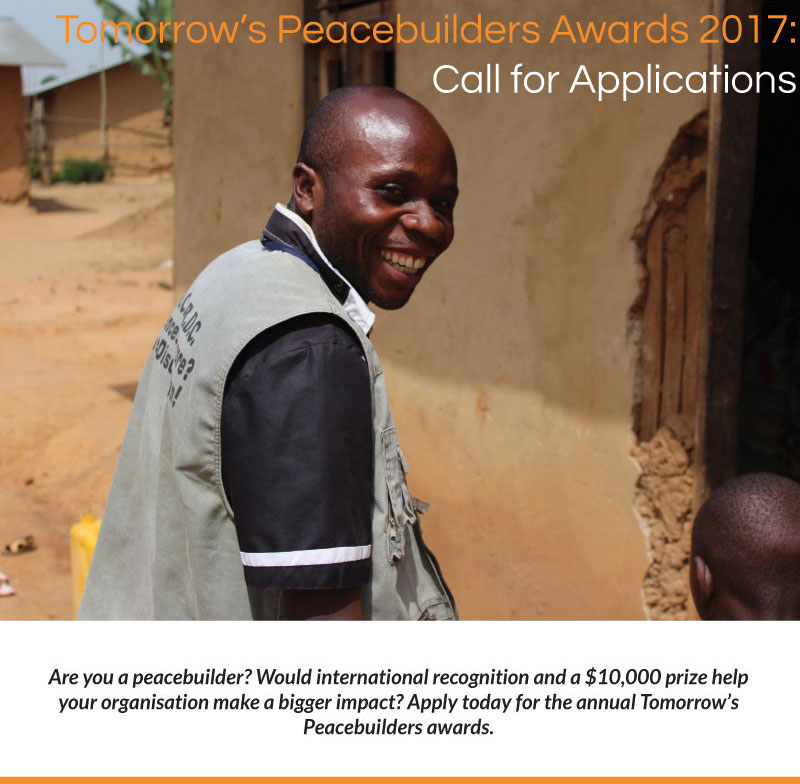 Across the world thousands of people are taking a stand for peace. Local people are freeing child soldiers, negotiating peace between warring communities and rebuilding lives after years of war. These people are working in places outsiders can’t reach, and have the knowledge, skills, and motivation to build peace in the most deeply divided conflicts.

Yet despite the immeasurable contribution of local people to building peace, they receive little recognition or support. The humanitarian system is stacked in favour of large international organisations at the expense of those making the difference in their local communities.

It is our mission to change this. To support and showcase the variety and scale of peacebuilding led by local people around the world, and to ensure their voices and solutions are heard.

Now in its fifth year, our Tomorrow’s Peacebuilders awards offer global recognition for grassroots peace activists in conflict affected countries all over the world.

These are the only global awards for local peacebuilders – inspiring individuals who are building a better tomorrow in the world’s most fragile places.

963 organisations from 91 countries entered in the first four years. Previous winners have demonstrated the range of innovative local approaches to peace – former fighters coming together for peace in Israel-Palestine, overcoming prejudice in the Philippines, showing co-existence is possible in Colombia, and much more.

Three grassroots organisations will win a prize of $10,000 and online promotion of their work. The categories this year are:

Entry forms and further details are online at www.peacedirect.org/tp.

This festive season, we’re looking back on all we’re proud of this year. Here are 12 ways we’ve been reminded that no matter the circumstances: people can build peace with the right resources, courage and determination. Read more »