In eastern Congo, we support our partners to rebuild trust, understanding and community life throughout areas affected by conflict. Working with Centre Résolution Conflits (CRC), Fondation Chirezi (FOCHI) and the Beni Peace Forum (BPF), here are seven ways we are helping those affected by war to rebuild their communities and become more resilient to violence and instability.

Our partners in DRC continue to mobilise and develop their communities, and this work has had a transformational effect of bridging ethnic divides, creating stability and changing attitudes. CRC brought together community members to develop community self-help initiatives, including the creation of a pharmacy, radio debates, community funds and training in livelihoods and agriculture. 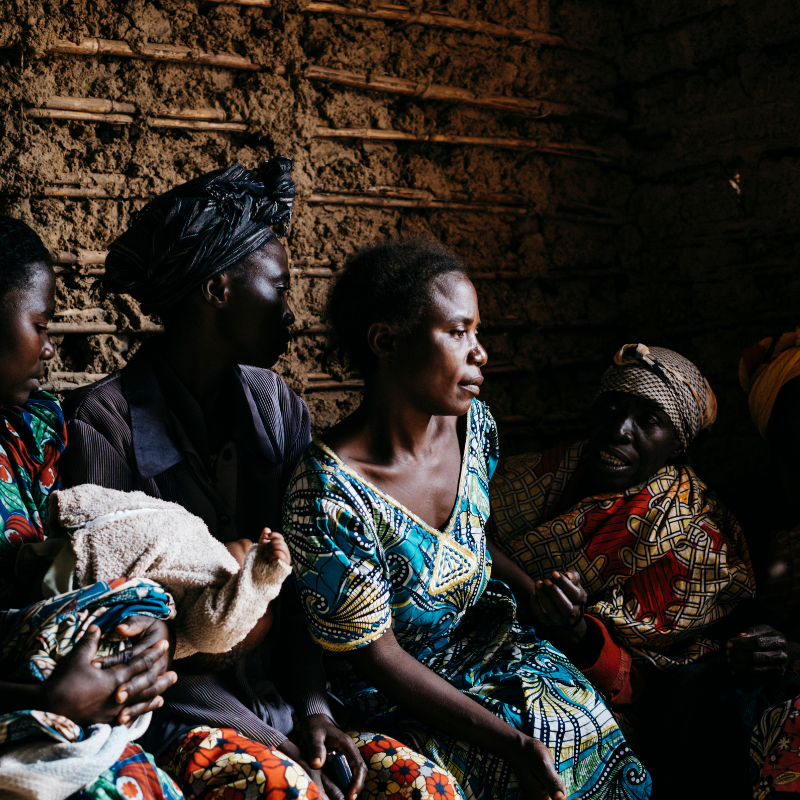 The community organised radio debates on topics such as leadership, peace and dispelling false information. As well as increasing income, security and stability for their communities, the initiatives have improved attitudes towards younger members of the community who are vulnerable to violence.

Keeping children in education during or after conflict is a life-saving priority, which CRC is committed to. Through their work they ensure that rescued child soldiers can return to school or receive vocational training in hairdressing, livestock rearing or other trades. Many ex-combatants face difficulties in finding work or generating income independently, making this work all the more critical.

Since their rescue in 2018, 45 child soldiers have so far gained employment or started to generate their own income, finding independence and contributing to their communities’ development, and avoiding a return to violence.

Through CRC’s work they ensure that rescued child soldiers can return to school or receive vocational training in hairdressing, livestock rearing or other trades.

Mining in Eastern Congo degrades the environment and compromises the health of thousands. Our award-winning Peace Gold project, developed and implemented with CRC, supports those affected by war in DRC to produce ethical and environmentally friendly gold. 680 ex-combatants have so far received training in environmental protection and gold production, non-violent conflict resolution, and financial management.

The mining cooperatives organise community sessions on conflict resolution and reintegration and set up two committees to resolve conflicts happening around the mines. After just one year of activity, eight violent incidents were dealt with peacefully by the committees.

Our award-winning Peace Gold project, developed and implemented with CRC, supports those affected by war in DRC to produce ethical and environmentally friendly gold.

In Beni, suspicion and rumours around disease, armed groups and imminent attacks are widespread. We support the Beni Peace Forum, a network of local organisations, to respond and deal with panic and mistrust, and prevent further violence or retaliation. BPF train local people on reporting incidents of violence and human rights abuses and violations. They have now established local protection committees, forming an early warning system across the region. By supporting communities to quickly collect accurate information on escalating tensions they are able to pass it on to local decision-makers and their communities.

BPF train local people on reporting incidents of violence and human rights abuses and violations. They have now established local protection committees, forming an early warning system across the region.

Faced with a lack of access to the state justice system for local people, FOCHI continued to build on the success of their local ‘Peace Courts’ model. The 76 courts strengthen the ability of communities to resolve local-level conflicts over land, identity, and disputes between herders and farmers; providing an accessible and trusted mechanism for fair, free and non-violent conflict management. Instead of using punitive methods, the Peace Courts use reconciliation and mediation, which reduces recourses to violence by encouraging dialogue over punishment.

We are now supporting a ‘Super Peace Court’, increasing the scale of work and bringing together influential representatives from across civil society, local communities, the police, local government and justice sector. Operating across different communities, eleven mediators were trained to solve disputes in the Super Court, gaining skills in conflict analysis, mediation and advocacy.

Growing an ecosystem of peacebuilders

We continue our support to the ‘Local Peacebuilding Support Offices’, which we established in order to strengthen the network of peacebuilding organisations in Eastern DRC, growing their capacity in conflict resolution and reintegration efforts; establishing more trusted, sustainable and resilient communities. With small teams in both North and South Kivu, the Support Office model is centred on collaboration and partnership, so that they can play a more active role in stabilisation and long-term peacebuilding efforts across the region.

The Support Office has identified over 270 local organisations and the scope of their work. Based on this insight the Support Office set up eight different working groups across the region and provided training on topics including conflict analysis, gender and DDR (disarmament, demobilisation, and reintegration).

Through creating an active network of peacebuilding actors with common goals, and identifying opportunities to collaborate and share knowledge on important issues, the Support Office is strengthening a growing ecosystem of peacebuilders who work together effectively to make their communities safer.

With small teams in both North and South Kivu, the Support Office model is centred on collaboration and partnership, so that they can play a more active role in stabilisation and long-term peacebuilding efforts across the region.

In 2018 we supported CRC in an emergency project to peacefully manage conflicts which arose as a result of an outbreak of Ebola. Tensions mounted between local communities wishing to maintain their traditions of paying respect to the dead or ill, and healthcare providers trying to contain the spread of the disease. CRC identified 24 groups including youth, women and church associations in 12 villages across North Kivu at high risk of contamination, with high levels of violence or beyond the reach of health care. Over 1,000 community members attended awareness-raising sessions on improving attitudes toward Ebola response teams active in the region, and on dispelling beliefs around witchcraft being the source of the disease.

CRC observed an important behaviour change towards the response teams since the project was implemented, especially among young people who had previously been hostile but now accompany them in their work. The frequency of violent incidents towards medical teams is now 15% lower since the project began. This means they can now move more freely to carry out their life-saving work in the region and access areas that were previously deemed too hostile and dangerous to access.

What 500 Sun Salutations taught me

For Juneteenth, our Development and Administrative Associate in the U.S. shares her reflections. Read more »

Statement from Saferworld, Conciliation Resources, International Alert and Peace Direct concerning the merging of the Department for International Development and the Foreign and Commonwealth Office. Read more »

What 500 Sun Salutations taught me

The yoga practice of Sun Salutation serves as a great sequence to energise the body and mind. This graceful movement found itself part of an altogether different exercise, fundraising, as Peace Direct, asked people to raise money by performing ‘500 Sun Salutations in May’. Read more »