This is a story of miles, sweat, and a great number of cultural references. This is the story of Rob Pope, a man who decided to cross America with nothing but his own two feet, and one or two pairs of trainers.

Standing apprehensively on the steps of Bragg-Mitchell Mansion, facing out onto Springhill Avenue, Mobile, Alabama, Rob waited until there was no one around to take his first steps onto the hot tarmac.

The enormity of his task began to swell in his imagination, how would he keep a good pace in 90F heat? Had he taken on enough liquids in the days before to make sure he was hydrated? Would he be able to find anyone screening the Liverpool vs Chelsea match?

Throwing caution to the wind, he stretched out his foot to make contact with the road, and started running.

Where it all began

Having watched a film about a man called Forrest Gump who loved a girl named Jenny, fought in the Vietnam War, marched on Washington, and went for a really long run, Rob felt inspired. And so his journey started.

In the early days of his epic voyage Rob battled the relentless Alabama heat. As he traversed Alabama, Mississippi and Louisiana, each day bought adventure, challenge, and surprise. The world seemed upended when in Nevada, Rob marvelled at a dusting of snow on the hills around him.

‘’Anything is possible,’’ he mused.

As he journeyed on, Rob went through ‘’Every kind of rain there is, a little bit of stinging rain, and big old fat rain. Rain that blew in sideways, and sometimes rain seemed to come straight up from underneath. It even rained at night.’’ The defiant Rob soldiered on.

At times, Rob’s only companions along hot stretches of highway were Bono, Freddie Mercury and Brian Johnson, sometimes accompanied by the occasional deceased armadillo. Unfortunately, the armadillo didn’t provide him with such good musical accompaniment.

He braved the wilds of New Mexico, enjoyed Paul McCartney references in Tucson, Arizona, and passed judgement over many a cactus in Joshua Tree National Park.

After 75 days and 2230 miles, he saw a wooden walkway approaching on the horizon. Rob began to hear a creaking, and glanced down to see if he’d already hit Santa Monica Pier. Alas it was his knees providing the sound effects.

Moments later, the creaking intensified and to Rob’s delight, the boards of Santa Monica Pier were gently bending beneath his feet. He had finally run clear to the ocean. 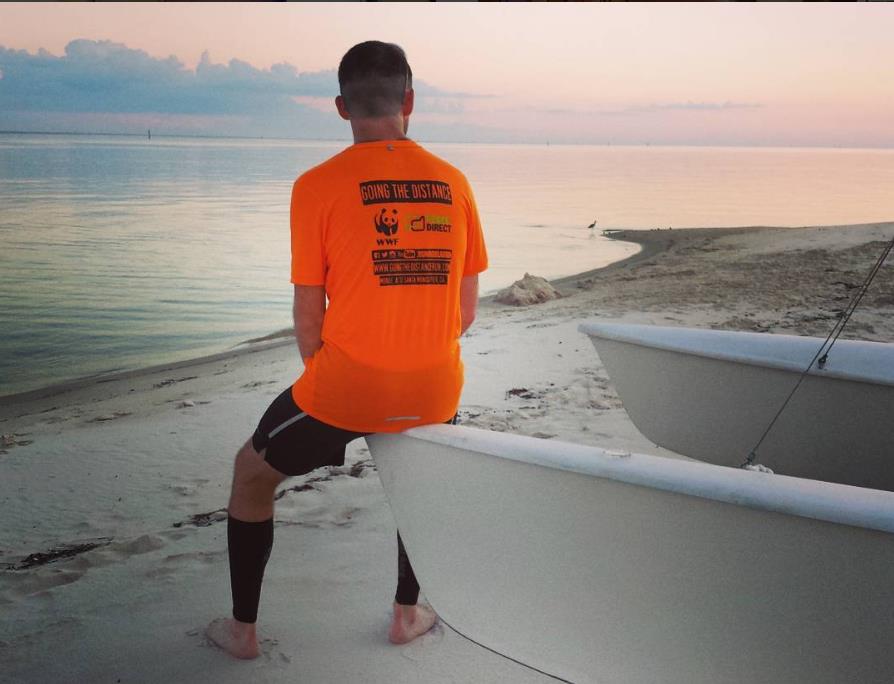 “This is what people do when faced with war and violence. They just keep going, whatever it takes.”

Rob didn’t stop there. He decided that since he had come this this far he might as well turn around and just keep going.

As he carried on running Rob thought to himself, “This is what people do when faced with war and violence. They just keep going, whatever it takes.”

He was reminded of one of the reasons he had decided to run, run some more, and just keep on running.

Because Rob believes in local people’s ability to work together, and help each other to stop wars, one person at a time and knows they need support and funding to keep going.

If you’d like to take on a challenge of your own to raise money for Peace Direct, email Lucy at [email protected].

Get involved – run with Rob

What are you doing to build peace?

Every donation to Peace Direct from the 1st to the 8th December will be doubled through the Big Give Appeal! Read more »

What are you doing to build peace?

We spoke to Valentina, one of our 2020 Peace Direct Programmes interns, on the experiences that led her to peacebuilding, her hopes for the future of peace, and what she wants to do next. Read more »