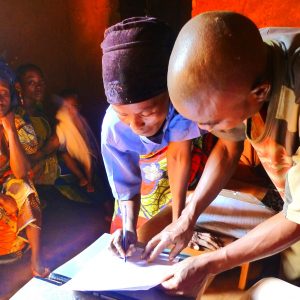 Our Congolese partner Fondation Chirezi (FOCHI) has established a network of peace courts, or ‘barazas’, in war-torn eastern DR Congo. In 2014 we evaluated their impact, and found that lessons can be learned from this very cost effective and sustainable model, for other countries that suffer similar levels of violence.

The use of peace courts in peacebuilding is not new and can be found in some form in many peacebuilding projects around the world, but it is often difficult to show the scale of its impact. What our evaluation shows is that peace courts are an important entry point for the international community, creating ‘islands of peace’ from which other peacebuilding activities can develop.

In addition, FOCHI has developed an innovative approach to integrating women into the courts process. After first establishing a mixed-gender peace court supported by influential men, FOCHI then creates an all-female peace court to encourage women to bring cases of sexual and domestic violence. The impact has been significant, with over 50% of evaluation respondents citing female empowerment as a most significant change.

Also noteworthy is the speed with which the Barazas have influenced attitudinal and behavioural change in the community. In a country which has suffered – and continues to suffer – the most atrocious violence, undoing the culture of violence is a huge challenge, yet there are clear findings that this is being achieved.