Next Monday, offices and schools around the United States and some other parts of the world will close in honour of Martin Luther King, Jr’s birthday. What would King’s message to us today be? How would he respond to the types of injustice and violence we face today? 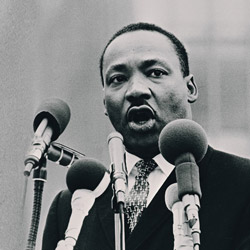 Next Monday, offices and schools around the United States and some other parts of the world will close in honor of Martin Luther King Jr’s birthday. The nonviolent activist and leader of the African-American Civil Rights Movement is a renowned public figure. But too often we simply enjoy the holiday without reflecting on what lessons King’s unarmed fight for equality and peace might have for our world today.

What would King’s message to us be?  How would he respond to the types of injustice and violence we face today?

53 years after Martin Luther King’s I Have a Dream speech, people still have to demand that ‘Black Lives Matter’ in the U.S.; 61 years after King’s first nonviolent protest in Montgomery, Alabama, unarmed youth still suffer from police brutality; and 49 years after King’s ‘Casualties of War’ speech against the Vietnam War, we scramble to survive and encourage peace in a world riddled with wars, conflict, and terrorism.

King and his followers faced brutalities, racial killing and conflict, and violence against unarmed civilians. They struggled to counter an extreme ideology of racial superiority and hatred that is not so far from the expressions of “terrorism” and “extremist violence” in other parts of the world that shock our conscience today.  Yet, his message and actions demonstrated that nonviolent solutions that sought transformative change in society were not only more morally grounded than returning violence with violence, but also more effective.

Recent research has backed this up. Maria Stephan and Erica Chenoweth, in their seminal study comparing some 323 armed and unarmed movements, found that nonviolent civil resistance is more than twice as effective as opting for violent struggle, and leads to more democratic outcomes over the long term.

As Dr. King stated in 1967, “Peace is not merely a distant goal that we seek, but a means by which we arrive at that goal.”

Peace Direct supports a number of local groups around the world that follow in King’s tradition of advancing nonviolent paths to change.  One such peacebuilding group, Action for Peace and Development, (APD) was started by Burundian youth who first formed what they called an “I Have a Dream” club, as a space for imagining and working toward a different future for their country.

APD organizes peace clubs in schools across Burundi, drawing youth away from militia recruitment and violence, and toward building a more democratic society. These peace clubs help young people develop the skills they need to resist political violence and promote peaceful action, and radio shows hosted by the students help spread what they have learned with their community members.

No doubt Martin Luther King, Jr. would laud groups like Action for Peace and Development for their work in combatting violence with peace. His vision and dedication to nonviolence and equality are sentiments that are sorely needed to counter the trends in violence and atrocities we face today.