The Women’s March was a historic and resounding success in sending a strong message that communities around the US and the world will stand up and speak out against sexism, hate, racism and division.

This chant roared across Washington, DC, and hundreds of other towns and cities around the US and the globe this past weekend as the Women’s March inspired millions to stand up for equality, diversity, and unity the day after the inauguration of President Trump.

I’ve never felt so proud of my country as I marched with family, friends who came from my hometown in Ohio, and thousands of others from around the country. It was an amazing display of the beautiful diversity of the United States and the values of compassion, tolerance, and equality that are at the core of our democratic experiment.

I spend much of my time advocating for the local voices of others, so I was deeply inspired to be part of such incredible local activism that became truly global in its reach. 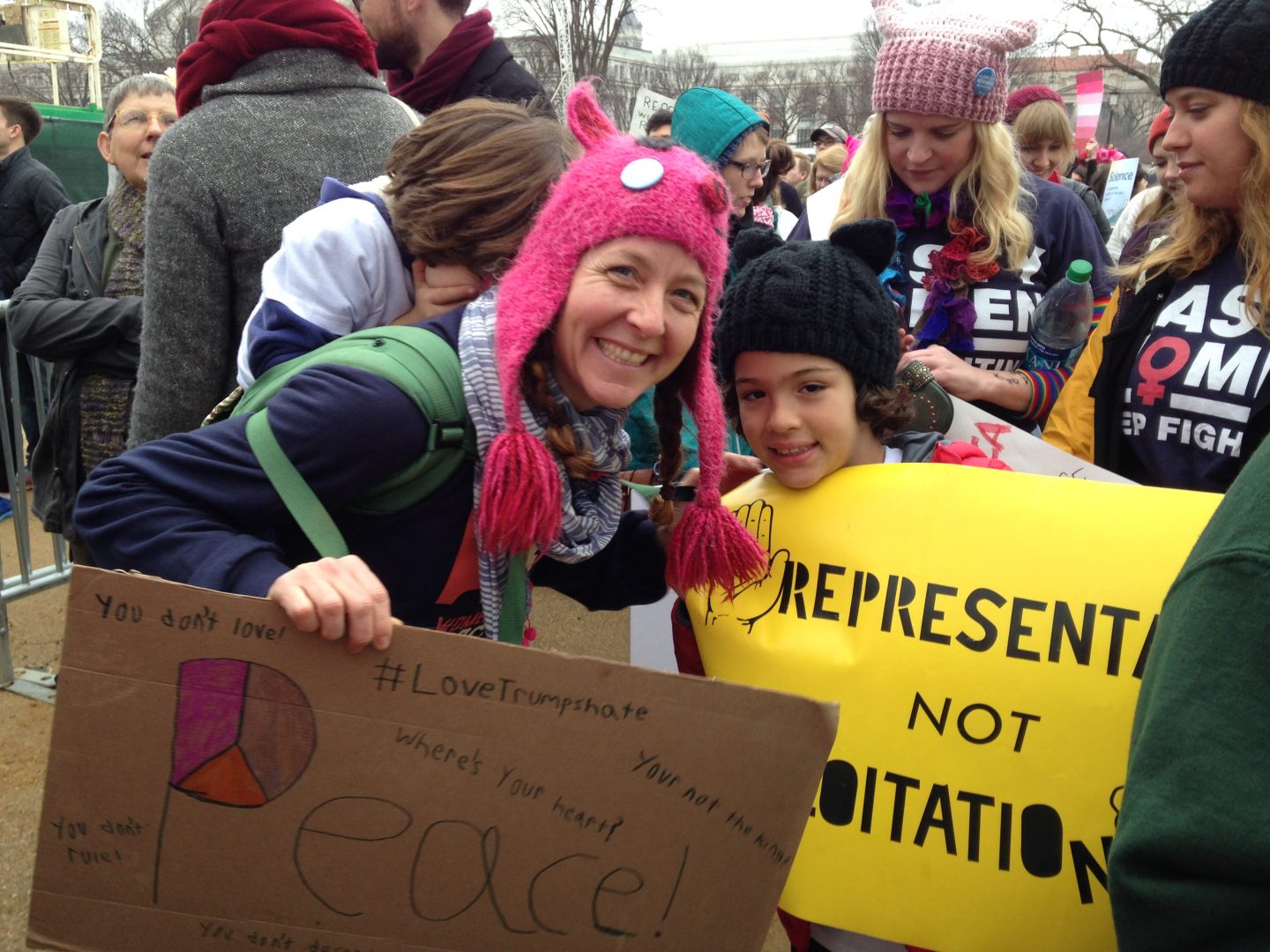 There were marching bands and megaphones, kids in strollers and elderly in wheelchairs, men with shirts that read “This is what a feminist looks like,” and, of course, a sea of pink hats. My sister and I wore the ones my mom, who couldn’t be at the March, had made for us.

Many people carried signs with the names of people they were marching for, or people who couldn’t be there but wanted to. My son, Pablo, messaged “I’m marching for my friend Caleb,” a young African-American neighbor with a disability.

The creativity, humor, and discontent on display in signs and costumes was also remarkable. I have to admit my favorite chant became “We want a leader, not a creepy Tweeter”, and my Mexican-American kids liked all the signs encouraging “Build bridges, not walls.”

There were older people, many of whom had lived through the civil rights movement, carrying bitingly funny signs. In one spot, dozens of people dressed in costume to create a wall with shocking Trump quotes scattered across it, stood silently side by side with linked arms. 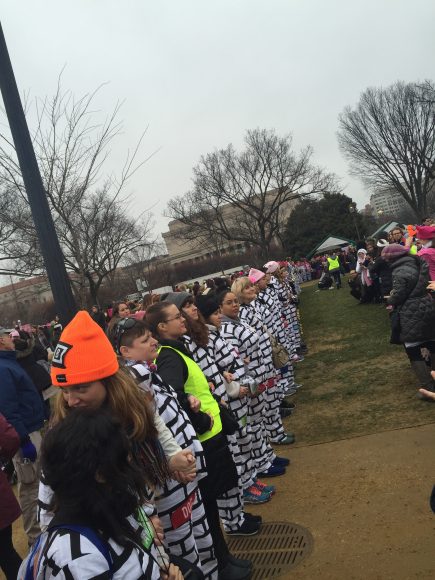 In Washington and many other cities and towns, the marches far exceeded the numbers expected, and people overflowed into the streets.

At times it was hard to move at all and the crowd swelled so large we couldn’t find where it began or ended.  My kids kept asking, “Are we at the March yet?  Is this it?” Uncertain myself where we should be amid the growing sea of humanity, finally I just threw up my arms and answered, “This is the March. We are the March!”

And indeed we were. Unable to get direction from the official stage which was blocks away, people mobilized themselves at the appointed time and began the slow but celebratory march toward the White House.

Despite the enormous crowds and a relatively thin police presence, there were no tense moments, no clashes or disruptions, no instigations. The throngs of people were joyful, considerate, and helpful to one another. It was the power of peaceful protest at its best on display outside the White House and around the world.

It was the power of peaceful protest at its best on display outside the White House and around the world.

The Women’s March was a historic and resounding success in sending a strong message that communities around the US and the world will stand up and speak out against sexism, hate, racism, and the message of a new President who the day before delivered dangerous words of division and exceptionalism to the country, and the world.

If we ever doubted that local action could “scale up” to have global impact, the Women’s March demonstrated the incredible power and potential of civil society.

In the days after, though, many are now asking, what next?

While the feeling of exhilaration and inspiration from the March is still with us, we are also more aware than ever that local action in our communities – the work of local peacebuilding that Peace Direct supports in other places around the world – is now our responsibility and our hope.

We are more aware than ever that local action in our communities – the work of local peacebuilding that Peace Direct supports in other places around the world – is now our responsibility and our hope.

The Women’s March organizers have launched a 10 Actions/100 Days follow up campaign to keep up the momentum for change and take practical actions for issues of women’s rights and equality in the first 100 days of the Trump Administration.

People are connecting and mobilizing with new energy in communities across the country. Of the women who came from my home state of Ohio to march with us, one has already signed up for a training to run for local office.

As for me, I hosted a #LoveThyNeighbor (No Exceptions) party the night of the March, and we enjoyed building community and fellowship with the remarkable diversity that exists right on our street. In the months ahead, I’ll be working on developing my own local peacebuilding skills, enriched and inspired by all the wisdom of local peacebuilders in my country and around the world.

I’m back at work renewed and ready for the work we have ahead as Peace Direct, in Washington, New York, London, Sudan, Burundi, Nigeria, Somalia, DR Congo, Zimbabwe, Pakistan, the Philippines, the Middle East, and with others around the world to lift up and strengthen the voice and impact of local action for peace.

Peace Direct is excited to announce the formation of a new Global Advisory Council. The group is made up of activists, researchers, human rights defenders and community leaders who are committed to helping us achieve our mission of stopping war. Read more »

In Universities up and down the UK, our Student Ambassadors are spreading the word about local peacebuilding. They use their skills, energy and enthusiasm to build a better, brighter future for people living in war zones. Meet some of our Ambassadors here. Read more »

Peace Direct alongside Search for Common Ground, and 39 organizations from the peacebuilding and humanitarian sector have expressed their commitment to supporting the global Youth, Peace and Security agenda and call on the US government to act.  Read more »