Two years ago, Fartun made the decision to take her three young children and flee their beautiful home. She knew if they stayed, they risked being killed by armed extremists, or succumbing to drought or famine. Despite this, Fartun’s life has been transformed for the better. With a new skillset, Fartun sees hope for her future.

Off the coast of Somalia, a small nation in east Africa, lie the Bajuni islands.

This used to be Fartun’s home, until attacks from militants and regular droughts turned it into living hell.

Two years ago, Fartun made the decision to take her three young children and flee their beautiful home. She knew if they stayed, they risked being killed by armed extremists, or succumbing to drought or famine. The journey itself was so dangerous they couldn’t take anything with them, just themselves, and hope of a better future.

Fartun began the unthinkably dangerous journey across the water, knowing they might encounter armed militants at any moment.

They began the unthinkably dangerous journey across the water to the mainland knowing that at any moment they might encounter armed militant group al-Shabaab.

They were haunted by the constant threat of being caught by militants. Finally, Fartun and her children arrived in Kismayo.

Lying on the east coast of Somalia, Kismayo was a sprawling city compared to her island village home.  Big buildings towered over them, and people filled the streets. Some soldiers walked through the town with their guns. People wheeled fruit, vegetables and fish to the markets to be sold.

In Kismayo, many other young people had been persuaded to join the militant groups, who offered them food and shelter when they couldn’t find it anywhere else. With three children to feed, she faced a terrifying reality.

But her luck hadn’t run out. 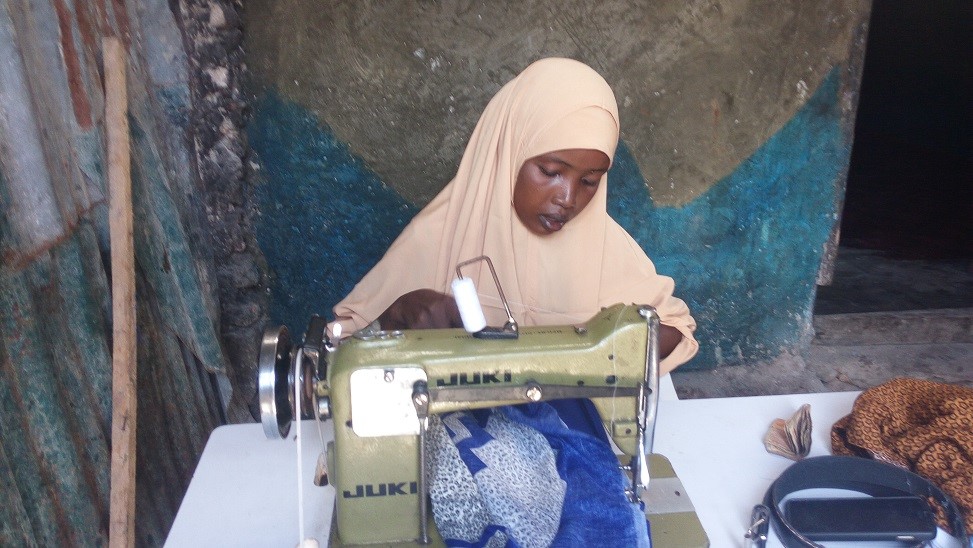 Fartun heard about a training course with our local partner, SADO, and she managed to enrol on it. For six months she learned to sew and tailor, and also grew her knowledge of business and enterprise.

By the time she graduated, she was running a small tailoring shop, able to feed and cloth her children, and make sure they had a secure home.

“I can use my sewing knowledge and skills I learnt to earn my own income. I do not have to rely on humanitarian help any more.”

Fartun now has ambitions beyond survival. She wants to expand her business, making and selling dresses, and sharing her skills with other women. She looks forward to the future with relief and hope.

Technology for peace, known as ‘peacetech’, has increased recently, with local peacebuilders using social media, data and a host of other tech advancement to drive for peace and tackle insecurity. New report by Peace Direct explores technology and peacebuilding. Read more »