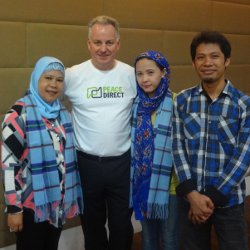 Judging the global competition for local peacebuilders organised by Peace Direct in 2013 was a difficult task. The judges were to choose four projects from the dozens of nominations from every continent, and to choose those that were making a real impact, were innovative and were likely to be a good example to others. We agonised over the choices we eventually made, disagreeing in ways that you might expect, based on our different perceptions and experiences. But there was one winning project that deeply inspired me. And last month I had the chance to meet up with Kapamagogopa.

Kapamagogopa Inc (KI for short) is based in Mindanao, a huge island in the southern Philippines where conflict has claimed lives and inhibited development for decades. There conflict has at times been very violent, at other times simply persistent. But such conflict has implications way beyond the violence that seeps into the consciousness of Muslims and Christians locally, exaggerating their fears and tensions.

In 2005 Mariam Barandia, a civil engineer, took the first steps to establish a volunteering organisation for Muslim youth. The result is KI, which places Muslim youth volunteers in Christian organisations. At first both communities were reluctant – maybe fearful – to welcome this, but over time new understanding has overtaken fear, and friendships made across the religious and cultural divide have lasted.

In 12 years, KI has supported 86 volunteers, each of whom today is part of COMVOL, an alumni association that supports new volunteers and continues their work to build understanding and peaceful co-existence. Mariam is still their leader, and she clearly inspires the young people she has supported.

I met Mariam with two of her volunteers in Manila last month. I had just spent a week volunteering with VSO and Beyond 2015, a coalition of campaign groups from across the Philippines. Almost everyone I had worked with was a Catholic in this most Catholic of Asian nations, but everyone I asked had heard of KI and were inspired by their work. And they worked hard to ensure that I could meet the amazing Mariam and some KI alumni.

Hafsa Madid was a volunteer in KI’s first year, and today she works in Manila in Human Resources for the World Food Programme. She explained to me the particular challenges for a young woman to take this step. Her calm confidence and determination left me sure she would make a huge difference somewhere during her life. She is active in building the network of KI alumni.

Ganie Amlain was a volunteer in year five. He comes from the area at the heart of the conflict, and his teenage years may have developed very differently if he had not joined KI. He faced hostility when he volunteered with Kapamagogopa, but his eyes shine when he talks about the experience and he has no regrets. Today he works in the community with young people, and supports more volunteers to take the steps he did.

The parties to the conflict in Mindanao have just signed their most significant peace agreement yet. UK experience in Northern Ireland has helped, behind the scenes, to convince them to give peace its best chance. But there are many hurdles still to cross.

The Filipino parliament must now deliver the Government’s side of the deal and establish autonomous devolved government across the country. Then peaceful elections can elect a representative assembly. The people and elected representatives of Mindanao will need young ambitious men and women who can help them build a permanent peace and deliver the development that will be the peace dividend. The alumni of Kapamagogopa will, I am sure, be among those first in line: and they will be better prepared than most to secure a peaceful future for their communities.