A crisis on the horizon for Zimbabwe? - Peace Direct
Posted by Tom Gillhespy on 16th October 2016
Tweet

The crises that are on the horizon for the Zimbabwean people seem much more urgent than any planned electoral process, and it is hard to see how the country can keep functioning until 2018 when the next election is scheduled. The death of Mugabe or a popular uprising seem more likely catalysts for a change in government – we can only hope that either of those pass with minimal violence and usher in a more democratic and responsible successor. 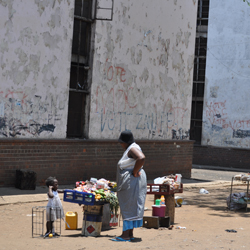 Since I was in Zimbabwe last April, things seem to only be moving deeper into a spiral of catastrophe. Zanu PF is in disarray, as the fight to secede Mugabe continues. The divisions between the war veterans and Zanu PF have deepened and many by-elections have been sparked due to the expulsion from the party of prominent members. This could be an opportunity for the opposition – the Movement for Democratic Change (MDC) – but the MDC is more factionalised than before with six MDC factions and there is the questionable MDC strategy of not to engaging in elections until there is electoral reform.

Even without a credible MDC opposition, Zanu PF still fear losing the by-elections with the most recent on 23 October 2016 in Norton experiencing violence and intimidation – yet Zanu PF ultimately lost and the candidate they had expelled actually won. This loss was significant, not least because of the effort they invested to try to win it. This recent spate of by-elections has propelled the 2018 election to the front of people’s minds and what they will mean for an economy that continues to collapse.

Of course the government denies the economy is collapsing. Indeed, it recently championed the fact that it managed to pay $107 million back to the IMF, in the hope Zimbabwe can meet conditions that will resume relationships with the fund. It is uncertain where that money came from – perhaps stashed away by the government or linked to the delays of salaries paid to civil servants. Either way, trying to convince the IMF that Zimbabwe is a sound government to lend to, seems a desperate and disillusioned strategy.

But what is on people’s minds most, is the government’s proposed move to introduce bond notes. Since the collapse of the Zimbabwean dollar in January 2009, following 231 million % inflation, Zimbabwe has been a dollarized economy. However, the government looks set to replace the dollar with bond notes – something many see as re-introducing the Zimbabwean dollar through the back door.

The rationale for the bond notes that the government put forward has some economic merit – a means to rebalance an export deficit and encourage the growth of domestic industries. But this is a country that has suffered over a decade of de-industrialisation, the collapse of its large scale farming and currently has to export its milk to neighbouring countries for pasteurisation, only to import it immediately back. In September, Harare hospital suspended elective surgeries for two weeks due to a lack of medicine and supplies. How can such a country respond to the challenge of filling the $2 billion trade deficit overnight?

A more plausible reason for the government abandoning the dollar (and not seeking the more sensible alternative of adopting the South African rand) is, unsurprisingly, desperate self-interest of the ruling elite. There are signs that the Zimbabwean central bank has exhausted its foreign currency: there are strict limits on bank withdrawals – as little as $30 a day at some banks – and there are incidents where petrol shipments have been turned away at the border due to currency restrictions. An impending fuel shortage will surely make the Zimbabwean population even angrier and recent protests are likely to become more common.

But a fuel shortage is just the tip of the ice-berg. Currently, as much as 60% of food is imported, with 700,000 tonnes of maize (50% of all maize consumed) being imported annually, much of it from South Africa. If the government introduces bond notes, surely no South African trader will accept them? If shop keepers in Zimbabwe accept the bond notes, how can they restock their shelves? Attempts to curtail trade across the border have already been tried, leading to violent protests in Beitbridge. If that trade is further limited and combined with a chronic food shortage, surely people will be left with few options?

So why would the government embark on such a risky move? Perhaps the government is hoping that the creativity of traders in Zimbabwe and South Africa will find a way to keep the flow of goods moving, averting a catastrophe. Or maybe they are so desperate and self-interested that they are willing to risk everything. Many believe the real reason behind the bond notes is to prepare for elections, whilst making a raid on foreign currency.

In this critical situation it might seem implausible that the government has such a luxury as to manipulate another election. The crises that are on the horizon for the Zimbabwean people seem much more urgent than any planned electoral process, and it is hard to see how the country can keep functioning until 2018. The death of Mugabe or a popular uprising seem more likely catalysts for a change in government – we can only hope that either of those pass with minimal violence and usher in a more democratic and responsible successor.